But that was a long time ago, and now those red Netflix envelopes seem as charmingly antiquated as the video stores they helped push out of business. All of those old conspiracies have been forgiven, and Netflix’s streaming service is easily my favorite source of ‘moving picture’ entertainment.

These days, my biggest problem with Netflix is that they seem to be weirdly tight-lipped about promoting their movie acquisitions. Sure they have ‘Popular Now’ and ‘New Releases’ sections on their site and their app, but those don’t seem to be particularly well curated. When a big, buzz-worthy movie is available (or going to be available in a month) on HBO or Redbox, they make sure their consumers know it. Netflix seems to hide away some of their best movies like a trendy nightclub on a back alley in L.A.

So I’m not surprised that CNN and EW.com have taken to publishing lists of all of Netflix’s new releases at the beginning of each month. Some would say that’s too much of an ‘advertorial.’ I say it’s a needed service. With that being said, I want to offer my own list of three movies that I recently watched on Netflix and enjoyed. Perhaps you would enjoy them too. 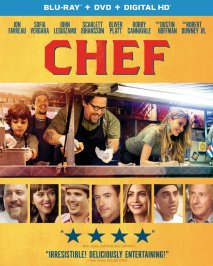 Chef (2014)
In 1996, actor/writer Jon Favreau used the 90s’ retro swing dancing craze as the backdrop to his story about twenty-something single guys living in L.A. With Chef, he’s focusing on a new trend and a new phase of adulthood. This decade’s trend: foodies / food trucks. The phase of adulthood: fatherhood. Nearly twenty years have passed, and it’s interesting to compare the cultural and technological differences between both films. In Swingers, Favreau’s character famously struggles with a prospective date’s answering machine. (Remember answering machines?) In Chef, the protagonist runs into disaster when he experiments with an innovation from this decade: Twitter.

Chef is mostly about a man struggling to balance his desire to be a good father with his need for professional and creative fulfillment. The pace and story is self-assuredly low-key, interspersed with lots of surprising co-stars (Robert Downey, Jr., Dustin Hoffman, Scarlet Johansson) and lively montages of mouth-watering food. Do not watch this movie on an empty stomach!

Perfume: The Story of a Murderer (2007)
This movie, based on a 2001 novel by Patrick Suskind, reminded me of the grimily wonderful work of Terry Gilliam (Time Bandits, The Adventures of Baron Munchausen). Perfume is about a man who suffers through an impoverished childhood among the most horrid smells that 18th-century France has to offer. Facetious spoiler alert: this was a pretty odious period in man’s history. Another facetious spoiler alert—or maybe you have gleaned this from the movie’s title: the man becomes a serial killer. He’s obsessed with distilling a perfect scent from the essences of the beautiful women he kills. Our anti-hero stumbles into great success working with the proprietor of a fine perfume shop (played by Dustin Hoffman) and soon his olfactory obsessions create a sensation among the upper echelons of French society.

How I Live Now (2013)
This film is also based on a book, a YA novel written by Meg Rosoff in 2006. A high-strung American teenager named Daisy arrives at her cousins’ bucolic English country house just as World War 3 breaks out. For the first act of the movie, Daisy is fixated on the typical social concerns of a teenager, on a new crush, and on a nearly unhealthy obsession with hygiene. We follow her perspective (which rarely rises above navel-gazing), so we only see vague hints of the coming calamity.

Daisy is frolicking in the forest with her new friends when they hear the distant rumble of a massive explosion, Then they are standing in an eerily beautiful snow flurry of gray ash. The teens naively decide they’ll be safe on their idyllic, isolated estate, and Daisy and her beau keep up their love affair despite signs of carnage in the distance. But soon they are all swept up by the tides of war. The last half of the movie turns quite brutal. I have to give the movie props for never making Daisy into a super-likable, wholly heroic character. Daisy does not outgrow her ‘personality flaws’ (her obsessive compulsive nature, her nearly anorexic focus on willpower, her puppy-love idealism). Instead, these ‘flaws’ become the source of her strength as she fights to reunite and save her cousins. But if you’re the type of viewer who like your YA heroines to be more like Katniss Everdeen, Daisy might leave you feeling cold.

One minor frustration with the movie: the causes and factions of the war are never revealed. At the end this is explained as part of the point. We can’t ask the world to make sense. Still, in these times of ISIS recruits and Russian expansion spreading across sovereign borders, it would have been nice to have a better idea of who’s causing all these atrocities. Still, I thought it was a very harrowing and haunting film.

How about you? Seen any great movies/shows on Netflix lately?

2 thoughts on “Movie gems on Netflix”