I’ve been trying more fantasy genre comics lately, including this 8 issue limited series, The Spire, and Monstress by Marjorie Liu, which I plan to review later. The two series have some similarities with topical parables to issues of today, including cultural melding and intolerance.

In ‘The Spire,’ the world is separated into two basic races, humans and the ‘sculpted’ (sometimes called ‘skewed’ or just ‘freaks’).  There are several types of sculpted, each mutated with extreme appearances and abilities. All of the sculpted are able to live in the outside world, which is a toxic desert wilderness. Because of the harsh environment, a good deal of the human population are squeezed in a towering city of stacked ghettos that gives new definition to the term ‘vertical growth.’ 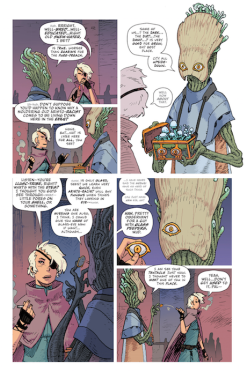 In this city, the titular Spire, humans and sculpted live almost literally on top of each other. The mix of weird ‘ethnicities’ will seem familiar to anyone who’s read  China Mieville’s New Crobuzon novels (and if you’re haven’t, you should check them out!), but Spurrier makes his world unique, with medieval/feudal politics and parables to today’s political climate–all knitted together in a nifty detective story.

The series’ protagonist is a sculpted woman named Sha who is the city’s chief of police. Sha is trying to stop a masked killer. Of course, the killer’s victims are far from random, and Sha eventually realizes that the killings are connected somehow to incident that befell the Queen-mother thirty years ago, while she was pregnant. Coincidentally, (or is it?!) Sha has a gap in her memory that has erased everything in her memory that is older than thirty years. Also, (coincidentally?!) Sha is in a clandestine relationship with one of the Queen-mother’s daughters.

t’s a compelling and intricate mystery. I was able to figure out some parts, and I was pleasantly surprised by others.

The other distinctive aspect of this series is the art. The art here is very cartoony in places, it reminds me of loose, doodle style you might see in a comic strip in a local alternative newspaper. The art adds some levity to the story, here and there, and it is definitely not a conventional match for a fantasy series. But it might not be everyone’s cup of tea.

The coloring is undeniably beautiful, though. Andre May uses a palette from the back row of the crayon box. Ultramarine, salmon, orchid, turquoise, pea green, and ‘off key’ pastels that add an otherworldly feel.

As I said, it you like comics and Mieville novels–or the Gentlemen Bastards books–then I think this series could be worth a try.