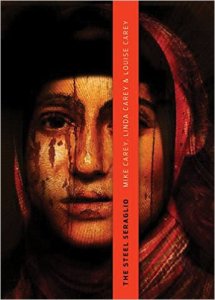 ‘The Steel Seraglio,’ by Mike, Linda, and Louise Carey (a dad, mom, and daughter team), is a wonderful epic story about women changing the world from unlikely origins—a medieval Arabian harem.

Considering its setting, it’s not surprising that the story works in elements of 1,001 Arabian Nights, with storytelling as a strong theme. But the first section of the book is more of a twist on the myth of ‘Lysistrata.’ In ‘Lysistrata,’ the women of Greece go on a sex strike to force their men from going to war. In ‘The Steel Seraglio,’ the protagonists go the opposite way, overindulging the bellicose Sultan (with sex, flattery,  white lies, and any other feminine wile they can muster) to soothe him into not pursuing wars. As a result, the seraglio (another word for  stealthily presides over the most prosperous and enlightened sultanate in the land.

Unfortunately, this ‘Pax Romantica’ is finally shattered by a truly frightening villain in Hakkim Mehdad. Hakkim is a religious extremist who believes all of Earthly existence should be a grinding, joyless slog to achieve perfection in the afterlife. He’s also got a unique origin story and a truly creepy secret totem that he keeps with him.

The protagonists are a savage exile, surrounded by men who see them as objects of gratification or political pawns to be slaughtered. But they work their way through each hardship with wisdom and cunning. These courtesans aren’t just sexpots playing dumb; they’re savvy, talented women.

All except one among them, who wields a sharp knife better than a sharp wit. I won’t give that woman’s name, because it would spoil her sudden introduction to the story. But let’s just say she is the land’s only professional female assassin, and she finds herself throwing in with the Seraglio. Soon she is recruited as the group’s reluctant (and refreshingly gruff) tactician. There are other standouts: the wise and aging matriarch, the snobbish and brilliant diplomat, and the librarian who was granted powers to see the future.

Lastly, there’s the slain Sultan’s last living heir, Jamal. Jamal starts the book as a young, inconsequential prince—far back in the line of succession—so he is both spoiled and essentially ignored. When the Seraglio helps him survive the slaughter of all his brothers and half-brothers, a new world of possibilities opens up for Jamal in exile. But will he choose to follow those possibilities toward good, or toward evil? Jamal has the the strongest character arc in the book. He’s written as a character who is hard to like, but easy to empathize with.